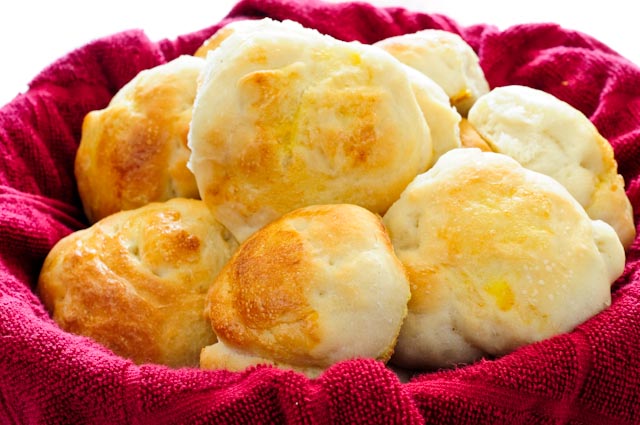 As I mentioned in my cinnamon rolls post, I’m slowly coming around to working with yeast. Baby steps…

For Thanksgiving, we were asked to bring pumpkin pie (thank you, Costco) and rolls. Since I went the easy route with the pie (pie crust is another harboring fear), I decided to make up for it by trying my hand at from scratch rolls. I didn’t have much confidence in this endeavor, so while I was out buying potato flakes, I also picked up 4 rolls of Pillsbury crescent rolls as backup. Thankfully, those rolls are still hanging out in the fridge.

The rolls worked! I read through all the comments on Mel’s blog, and did the best I could to combat any possible mishaps. I made the dough the night before, put the shaped rolls in the fridge and baked in the morning.

Yeast is probably one of the tastiest ingredients ever.

Whisk water, oil, sugar, and yeast together in a small bowl or liquid measuring cup until the yeast dissolves. In the bowl of a stand mixer fitted with a dough hook, mix flour, potato flakes, and  salt until well combined. Add water mixture in a steady stream with the mixer on low until the dough comes together, about one minute. Knead the dough until it is smooth and comes away from the sides of the bowl, about 6 minutes (add additional flour if absolutely necessary to make a soft dough that doesn’t stick to the sides of the bowl while kneading). Knead the dough briefly until it forms a smooth ball.

Punch down the dough and divide it into 24 equal pieces (divide into quarters and cut each quarter into thirds). Form each piece of dough into a ball by lightly cupping the dough in the palm of your hand and rolling it on an unfloured surface in a circular motion until it forms a smooth ball.

Transfer to a parchment-lined or lightly greased rimmed baking sheet. Cover lightly with greased plastic wrap and let rise until doubled (about an hour). If you are making them the night before, do not let them go through this rise, instead transfer to the refrigerator. Take the rolls out 2 hours before baking to allow them to come to room temperature and rise.